The Importance of Protecting Your Driveway's Cracks and Joints 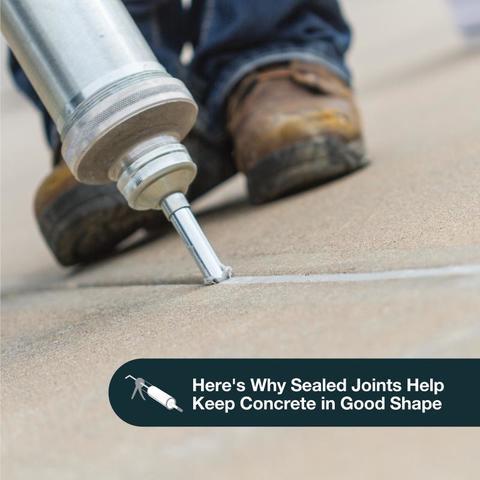 We admit this isn’t the most exciting headline in the world, so if you’ve read this far, we can probably guess that you are at least a bit curious about how and why to seal the various cracks and joints in your driveway.

What’s a Crack? What’s a Joint?

Before we start, we need to address the above questions because your driveway likely has at least one of these, if not both. First, let’s talk about the cracks that are supposed to be there: control and expansion joints.

Control joints are deliberately placed into concrete slabs to “control” their inevitable cracking. That’s because, as concrete cures, it shrinks and cracks. So rather than have cracks appear randomly, which would look pretty shabby, control joints allow the concrete to crack in a straight, ordered manner. For a driveway, this is most often done by using a trowel to make shallow grooves into the new concrete while it is still wet. When the concrete cracks, it follows these predetermined lines, leaving your driveway slabs looking neat and ordered.

Expansion joints are wider joints that connect the driveway to the garage at the top and to the street at the bottom. As their name suggests, these exist to allow for the natural expansion of your driveway’s slabs during hotter months as the street in front of your home expands and pushes on them. However, they are often filled by the contractor with inferior materials that don’t offer much “give.”

Cracks are just that — random breaks in the concrete that have occurred over time due to uneven slab settlement or other stresses. But like control joints, they open a path for water to seep beneath the slab, which can cause the soil underneath to soften and wash away over time. This can, in turn, cause the heavy concrete slabs to sink.

Stopping Water From Getting Under Your Concrete

Preventing moisture seeping under your concrete is the primary reason for sealing your driveway’s control joints. As mentioned above, when water seeps beneath your concrete slabs, it can cause the soil beneath it to soften and compress. In some cases, it can even wash away soil, leaving empty spaces underneath. When the soil compresses or these voids appear, it can allow the heavy concrete above to sink. And as this often happens unevenly, with one part of the slab sinking faster than another, this added stress can cause uncontrolled cracking, eventually resulting in a driveway that’s uneven and unattractive. Not only does this lower your home’s curb appeal and potentially its value, but it can also present a tripping hazard that can be a liability for the homeowner.

In addition to the problem of water getting beneath your home’s concrete, there is a phenomenon known as “street creep” that can put pressure on your home’s foundation, causing severe problems down the road.

As you probably know, as materials heat and cool, they expand and contract. Concrete is not immune to this, so it’s easy to imagine this scenario: As the concrete slabs in the street in front of your home cool with the weather, they contract. This causes the joints between them to expand. These joints then become filled with grit, sand, pebbles and other incompressible materials.

Fast forward to the hot summer months. The warm weather now causes those street slabs to expand — only they can’t expand back into the joints because those are now full of grit, sand, etc. So, without the empty joints to allow for expansion, the entire street expands outward, slowly pushing up your driveway and into your home’s foundation. Scary stuff indeed!

Fortunately, there are solutions for all these issues. Sealing your driveway’s control joints and cracks with a flexible material like NexusPro® prevents water from seeping beneath the slabs and affecting the soil beneath your concrete. The sealant also prevents contamination from pebbles, grit, etc. from entering the joints which can prevent the joint from performing as intended.

You may be tempted to try caulking your driveway cracks yourself. After all, it seems as if it should be pretty simple. But, it should be mentioned that silicone-based sealants like NexusPro are far superior to cheaper polyurethane-based caulk because they won’t dry and crack over time due to UV exposure. This also makes them less expensive over time.

“Street creep” can be addressed by filling the expansion joints at the top and bottom of your driveway with a thermo-rubber solution called Compression Guard®. This proprietary solution exhibits much more elasticity than traditional expansion joint materials, allowing it to absorb the expansion of the street in front of your home and keep doing so for many years. If you’re concerned about driveway slab settlement or street creep, call Cantey Foundation Specialists, your local NexusPro and Compression Guard dealer for a free, no-obligation inspection. We can provide a simple, inexpensive solution that’ll keep your home’s concrete looking good (and its foundation safe) for many years to come. Plus, unlike DIY store solutions, NexusPro comes with a warranty to give you the peace of mind you deserve.

Back to Previous Page
Back to News & Events